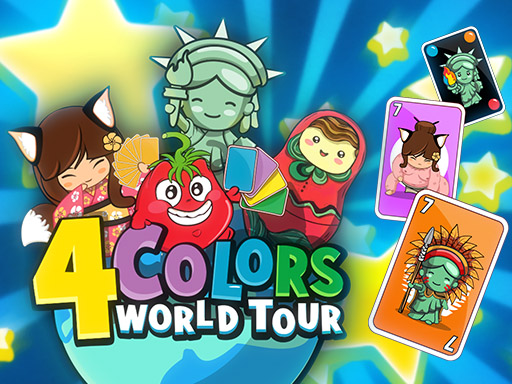 Get ready for a brand new take on the classic game with Four Colors World Tour Multiplayer! It's never been more fun to play the four-color game you know and love in this online game with real-time opponents! Having said that, are you ready to face any challenges that come your way?

Throughout this four-color game, you'll be joined by some of the cutest tiny creatures you've ever encountered. You will be able to glimpse the charming faces of various cartoon characters on each of the cards. In some cards, they are merely included for aesthetic reasons, but in certain unique cards, they serve as a means of describing the card. Included among these are the block card, which prohibits the approaching adversary from performing his or her turn, the reverse card, which modifies the direction of the game, and the cards that compel your opponent to pick 2 or 4 cards while letting you to choose which color of the cards to play. It is best to either match or contrast the number and color of the card that will be placed in the center with the number and color of the card that is currently in the center in order to minimize misunderstanding. The individual who finishes all of the cards in their hand first is declared the winner of the game. Don't forget to click on the button with the number 1 when you have only one card left to play with! Alternatively, you will be required to pick an extra card. Choose whether you want to play against real-time multiplayer opponents, against the computer, or with a friend who also has the same device, and prepare to have a blast with this card game!