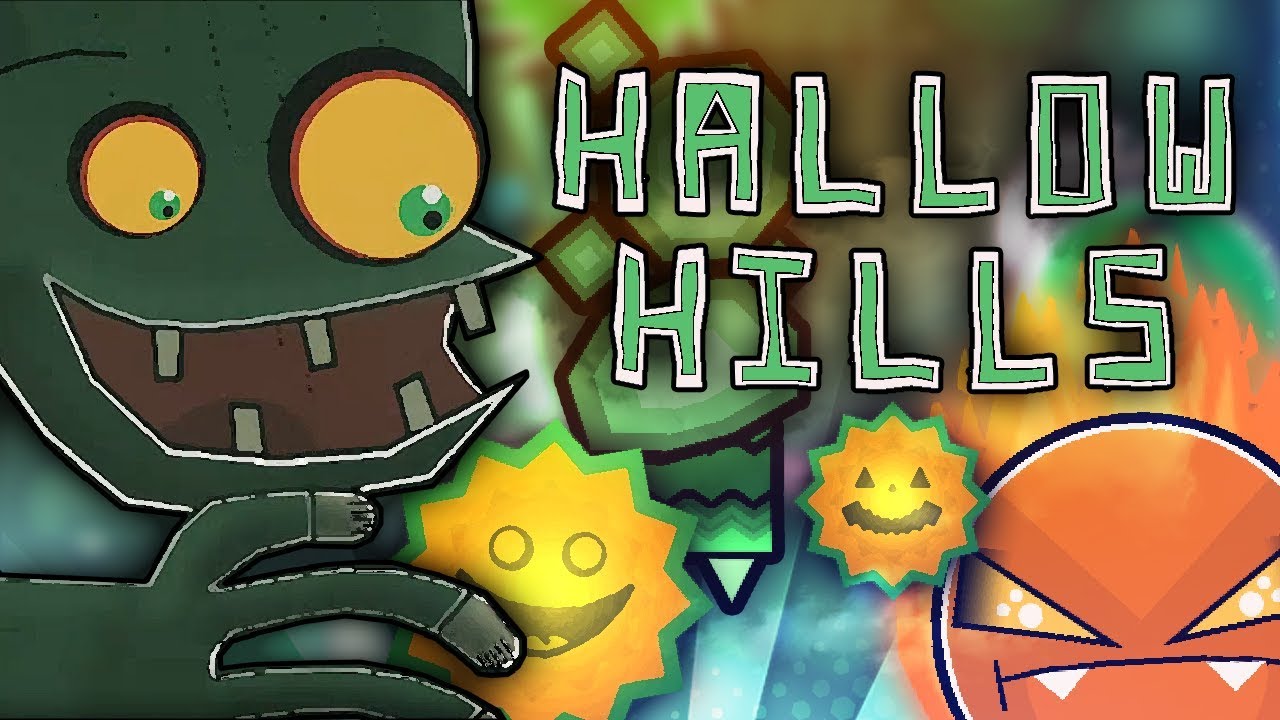 Geometry Dash Hallow Hills made by Alex112300, is an epic medium demon level rated 10 stars and 2 user coins. This level is made in an art style with elements of the Kips style, which is reminiscent of Magma Bound. The main decorations are various characters in the background, such as pumpkins, ghosts, scary faces, which tells us that the level is made on the theme of Halloween. Hallow Hills's gameplay does not stand out much from other levels, although it is not bad in principle. The length of the level is quite large - 1 minute 56 seconds.

The level begins with the fact that we are offered to take a reinforced LDM, then sent down with the help of an arrow. The first cube contains a lot of spheres (most of them are arrows), while there are small timings. Then we become a robot and again a cube. For a short while, the cube becomes like a smiley of sticks, and you will need to make 2 jumps.

The drop begins with one of the most difficult parts of the level - the UFO, where you have to alternate precise jumps with clicking on the pink arrows. The ball contains slightly difficult gravity changes, and the spider requires a quick reaction, but is generally simple. Another UFO requires frequent but precise clicks. At the end of the drop, we change the gravity on the ball 5 times.

We have to hold on to the mini-cube and make 9 jumps, and then jump on the spheres. The next part is a cube or a robot (depending on the collection of skulls), containing timings at high speed.

And here is the second drop! Banal UFO stages dominate here, but there are other sections: a ship with a sphere, a cube with only jumps on spheres, and a cancer robot. Then we move into a long straight, where among the scenery we can note numerous eyes and a crazy monster in the background. On a wave, the scenery is very similar, and we have to spam on the big waves and go through the shrinking passages on the small ones. Next comes the cube / robot with small timings (relevant only for the robot), and towards the end of the section, zombies start chasing us. On easy duals with spheres, he comes closer and closer...

Suddenly, the drop ends and we see a defeated enemy. The last stage consists of rather difficult timings; at the end we jump over triple spikes, after which we see the name of the level, the burning icon Easy Demon, congratulations on Halloween and a list of thanks.