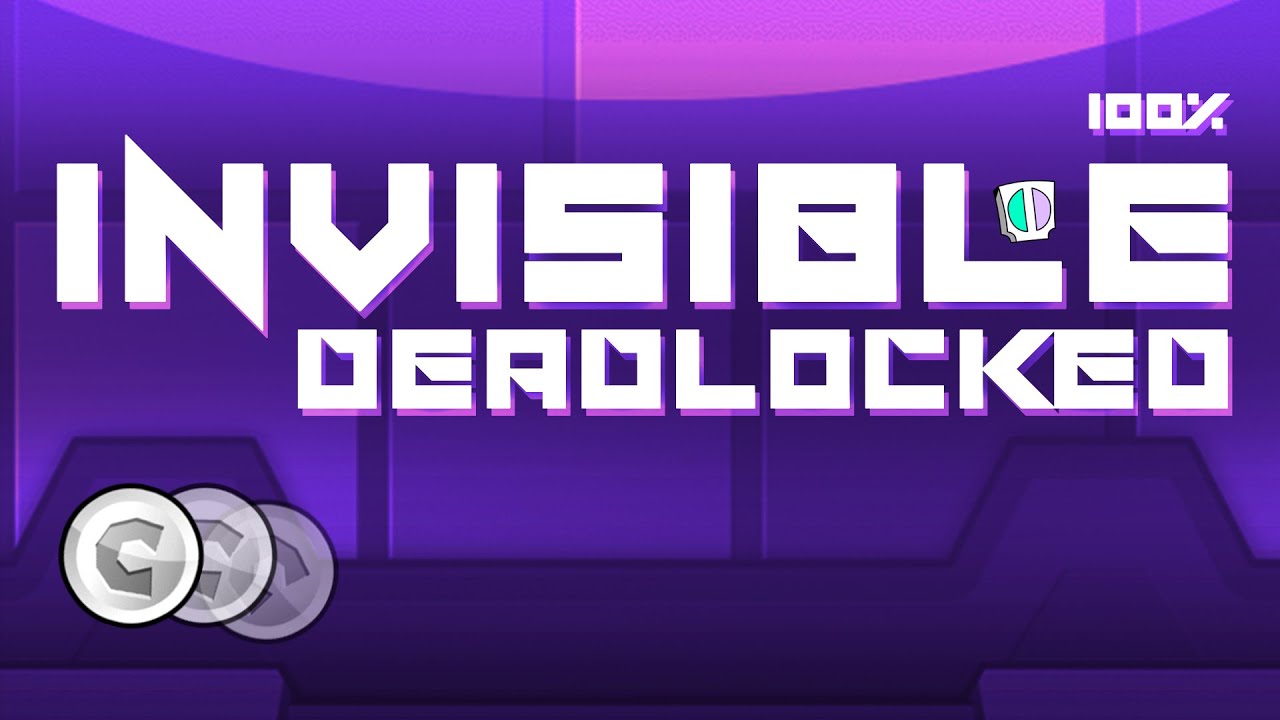 Geometry Dash Invisible Deadlocked is a solo Insane Demon developed, validated, and released by KrmaL. It is, as the name says, a fully invisible version of Deadlocked.

The level begins with a cube part in which you must leap orbs and semi-blocks, sometimes jumping through teleportation portals. This section is also interrupted at the start by a brief wave portion, but only for 0.8 seconds. The music then stops, and the player enters a triple-speed wave portion in which they must overcome an obstacle with continual variations in gravity. Then you transform into a ship. The player must fly between the cubes with moving faces, and there is a key that unlocks the route to the first hidden coin.

The ball section starts. The player must transition from one platform to the next. They should, however, only travel onto platforms with a blue edge, disregarding those with a red edge. The player then transforms into a UFO and bounces between moving pillars, adjusting gravity. The cube part starts. You strike jump orbs and hop onto platforms at twice and treble speed this time. The player quickly transforms into a robot. They must now leap over spikes as well.

The player next enters another ball portion, but this time it is mini-sized. The player must navigate a spike-filled tunnel, utilizing teleportation portals to go from one section to the next. Then you transform into a cube and get the first coin. You now enter a mini-cube segment and hop onto brick platforms. What makes this part unique is that the pads have been replaced with blue jump orbs. The gamer is now transformed into a robot. They dodge gears by jumping onto jump pads.

The player will then enter a fire-themed double-speed ship scene. They are flying through a tight terrible tunnel filled with demons. Their size and gravity fluctuate throughout this period. You then transform into a UFO. The first creature then arrives and shoots a red laser at you. Soon, fire arrives in lieu of the laser beam, which has the potential to kill you. Following that, a couple more creatures will come, whose lasers you need avoid if you want to grab the third hidden coin. Furthermore, saw blades will partly obstruct your progress. Then, identical to the previous wave, comes the triple-speed twin wave portion.

Following that, the player enters a double-speed ship sequence. In this game, the player must fly past a set of bricks that move about and transform into a ball. They must navigate two platforms while avoiding the spikes. After a UFO portion in which you hop across moving half blocks, you transform into a cube. All you have to do is jump onto the platforms and over the gears. Finally, there is a vanishing spike that will kill you 98% of the time. However, if you leap over it, the level is over!