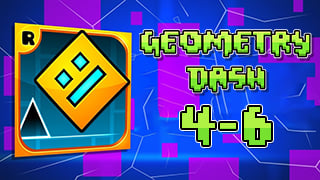 Continue to explore Geometry Dash, an exciting infinite running game with three attractive levels, respectively, Dry Out, Base After Base, and Can't Let Go.

Dry Out is the fourth level of Geometry Dash (and Geometry Dash Lite) with a Normal difficulty. A fragment of an antigravity cube is used in this level to introduce the gravity gateway. More often occurring vertical barriers call for more precise movement that forbids pointless hopping. Between 34% and 51%, there is a part involving an antigravity cube, and between 67% and 84%, there is a single ship sequence. A minimum of 106 jumps are needed to finish Dry Out, which takes 84 seconds.

Base After Base is the fifth level of Geometry Dash and the first level with a Hard difficulty rating of 5 stars. Base After Base maintains the same difficulty level as the level before it, Dry Out (Normal 4☆). Between 53% and 69%, there is a single ship sequence, and between 71% and 85%, there is an antigravity cube portion. Base After Base developed from Ultimate Destruction at the beta stage. This level demands a minimum of 103 leaps and takes 86 seconds to finish.

Can't Let Go allows players to make jump moves, such as spike setups with spikes barely clear of the spikes above, which are more precise and time-consuming. Jump rings are used in the antigravity part of the second cube sequence, which increases the level of difficulty. Between 57% and 70%, a single ship sequence appears, and between 70% and 86% is an antigravity cube sequence. The magenta jump pad is first shown in "Can't Let Go" as part of a hidden coin collection, even though it isn't really introduced until "Theory of Everything." Can't Let Go demands a minimum of 108 leaps and takes 83 seconds to finish.

Thanks to hoppingicon from Scratch for this project!