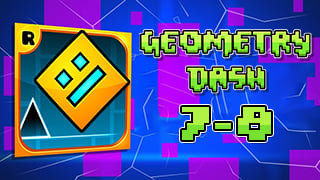 Keep exploring two levels of Geometry Dash is Jumper and Time Machine of Harder difficulty, with ratings of 7 and 8 stars, respectively.

Jumper is a Harder level with a difficulty rating of 7 stars, and is also the seventh level of the Geometry Dash series. Jumper requires more precise maneuvers and has more antigravity portions, both of which the spacecraft experiences for the first time in the first sequence. Ship sequences occur between 25% and 37% and between 62% and 75%.

Jumper used to own an Insane difficulty. Small spikes may be found in this level behind the first hidden coin; however, they aren't explicitly introduced until Clutterfunk. The audio track Jumper, which was first published in 2005, is the game's oldest soundtrack; it was also previously utilized in Castle Crashers. Jumper takes 89 seconds to complete and requires a minimum of 106 jumps.

Time Machine a Harder level with a difficulty rating of 8 stars, and is also the eighth level of the Geometry Dash series. The brand-new mirror portal will be introduced in Time Machine. The difficulty rises as the number of triple spike setups and antigravity portions increases, as shown throughout the final ship phase as well.

Time Machine used to possessed an Insane difficulty. The only level that concludes properly while being affected by the gravity portal is Time Machine. Although it isn't explicitly introduced until Theory of Everything, the magenta jump ring is revealed in Time Machine as part of obtaining a hidden coin. Time Machine demands a minimum of 107 leaps and takes 99 seconds to finish.

Thanks to hoppingicon from Scratch for this project!