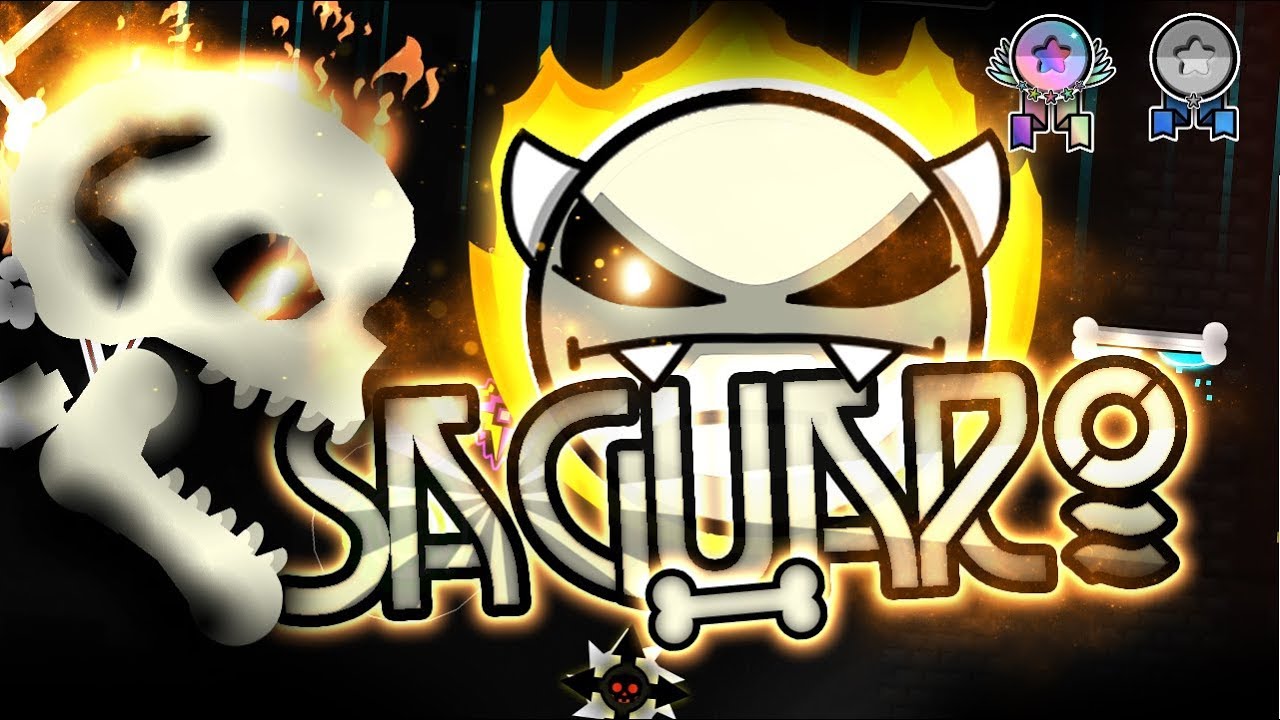 Geometry Dash Saguaro by OSIRIS GD is an epic easy demon level rated 10 stars and 2 user coins. The level contains many brightly colored elements. At the same time, it is decorated in basic and neon styles. Thanks to all this, Saguaro got into the hall of fame. The gameplay is quite difficult due to the frequent change of forms, although the level is still quite simple for its complexity, which is why many players consider it an average demon. There are no coins in it, and it lasts 1 minute 13 seconds. Also, this demon is a sequel to another level by the author, Oblivion, as Fury0313 said in the description of the level.

Geometry Dash Saguaro is not very popular because of its complexity.

Saguaro starts with a cube stage with decor in blue and purple. With the help of the player, the spheres must bypass the traps: saws, electric current, and spikes. The part is simple, but you need to press it often and accurately. Then, on the stage of the ship, we pass through three tunnels with spikes. Be careful, the passages are very narrow in places, especially in the second tunnel, as there you have to fly through a one-block-thick hole. Still, the phase is not very difficult because of the length.

Then again, the cube stage with timings. We will be thrown up, and we will become a UFO. To change gravity, you need to pass between the spikes. The color of the surrounding objects will change. Turquoise and black colors will prevail, but not for long: after turning into a ball, we will see orange decorations. Of the traps, it is worth highlighting the spikes and lava. Another part with the game as a UFO, again with a change in gravity. Then, at the first stage of the spider in the level, just bypass the spikes. Soon the long phase of the cube begins with black and white decor and timings.

There are many distracting neon beams that change position. Here is a ship with a change in gravity. Soon after, double cubeBut a jump between spikes and electricity, and the stage is over. instant part of the ball. By clicking once, we will again turn into a cube. The screen will darken. What's next? Then, at triple speed, when you see a flashing red screen, you will become a wave that changes size. You need to click here often, sometimes bypassing very narrow passages. In addition to the blocks, there are other objects that are dangerous to us: an orange current and small saws. This is perhaps the hardest part of the level. auto-part cube. Again, short phases of the ship, cube, and UFO.

Then the instant part with the game for the wave and the cube. Stages will often feature decorative laser beams moving across the screen. But then we'll transform into spiders. You need to press very often, calculating the time with accuracy, otherwise we will die from the spikes. The screen goes dark again. Here the stage of the ship already begins. Becoming a cube, we pass moving platforms with spikes and a current, a short phase of the wave, and soon part of the cube. The lasers, meanwhile, continue to rotate across the background, distracting us. A short stage of the ball and finally, the cube portal, after which we pass the level and get a well-deserved reward!