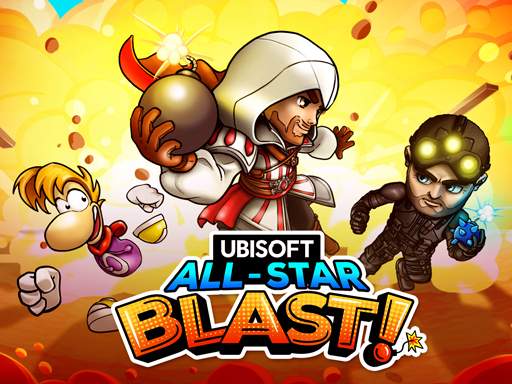 Ubisoft All Star Blast! lets you blast your way. You can take inspiration from the classic game Bomberman, and blast your way through the levels dropping bombs at strategic locations to defeat your enemies. To eliminate your opponents, run through the maze, blast the containers and detonate explosives.

The Bomberman Labyrinth is your goal. You may accidentally drop explosives as you run through the narrow passageways. Keep your distance from the explosion. You might find secret power-boosters in crates that are blown up. This multiplayer game also features a labyrinth. You should try to sneak up on them, and place your explosives so that they are trapped. As the game progresses, the arena will shrink as more plants and trees grow around the outer perimeter of the maze. All players will be forced to gather in the middle of arena for final fight.

Unlock all the characters from All-Star Blast! Every win will bring you a significant amount of money that you can use to unlock more powerful, better-quality characters. The Ubisoft Nano game features over 25 characters from Ubisoft's most popular series including Rayman's adventures and Assassin's Creed. It also includes Far Cry, Rayman's adventures and the Tom Clancy stealth games. Brawlhalla is just one example.

How To Play Ubisoft All Star Blast!