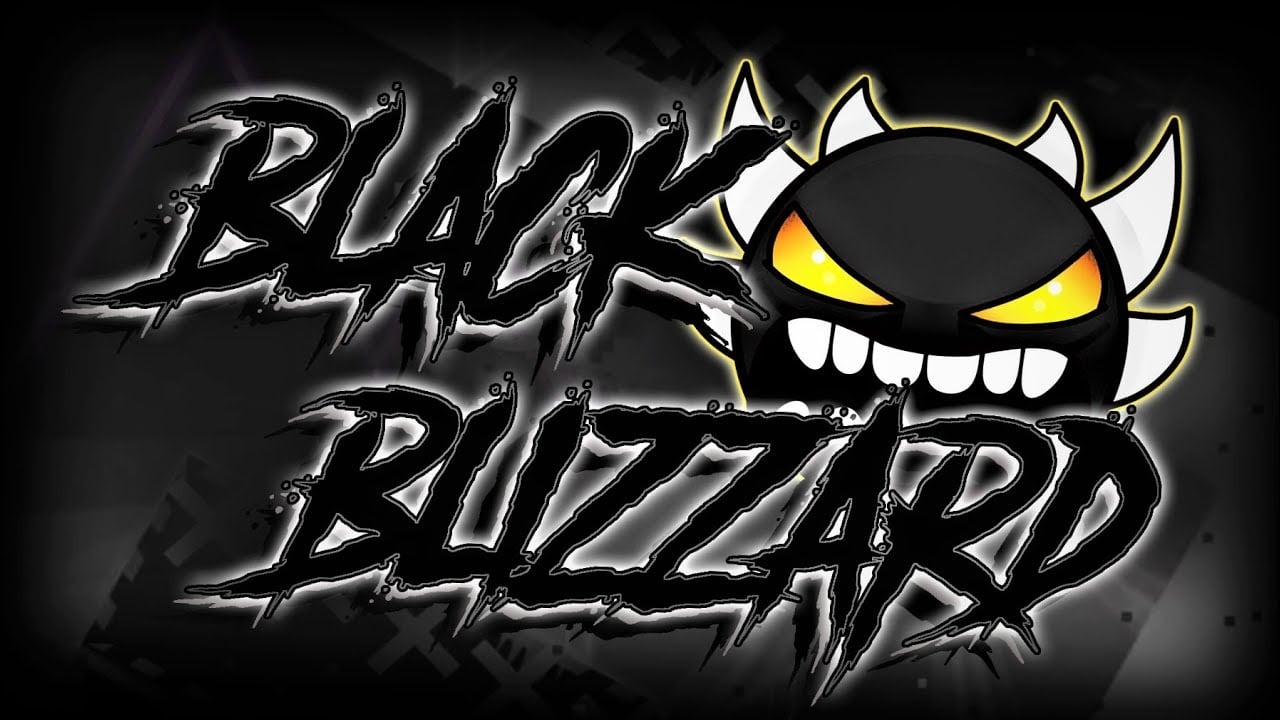 Geometry Dash Black Blizzard is a solo Extreme Demon level rated 10 stars produced, validated, and released by KrmaL on May 21, 2017, after a four-month verification period. This level was created and verified during two revisions. Black Blizzard, like most of KrmaL's Demons, has a lot of challenging timings and difficult portions. The level has gloomy decorations and effects that often impede the player's vision. The orbs are completely dark as they approach the descent. It keeps the player unaware of the purpose of each orb, forcing them to remember it.

The level begins with a half-speed mini-cube portion with little dark decorations and multiple tricky timings. The gameplay revolves largely around orbs, with a few hops thrown in for good measure. Halfway through, there comes the famed "staircase," which if not timed correctly on the initial leap might result in an irritating death near the top. The segment concludes with a brief auto portion as the player switches onto the following phase.

The player next enters a tough normal-sized cube segment. This section, like the preceding one, has a lot of problematic orb timings. It's been adorned with a lot of fog and lines flying across the screen. Throughout the segment, there are two moving cross-hairs that jump from orb to orb. Most of the orbs that the crosshairs leap to contain little saws that will kill the player if touched too late. At the conclusion of the component, two sets of triple spikes are installed. The screen then goes dark as the level name is shown, marking the drop.

The descent begins with a triple-speed UFO portion with many gravity shifts and considerable spam. It then moves on to the ball, which has several extreme timings. The spacecraft follows, with some straight flying and green orbs to strike. The first half of the drop concludes with a cube with even more continuous gravity shifts and a yellow pad at the end to transition into the second half of the descent.

The next portion of the level is regarded as the most difficult in the whole level. It has incredibly challenging mixed dual portions, most notably the mini-wave/UFO mixed dual at the beginning, which requires near-perfect handling. It then shifts to a similarly difficult dual: a tiny ship/mini ball mixed dual, which is probably the most uneven aspect of the descent. Following that is a cube/robot mixed dual, which is not as difficult as the previous two dual segments but still involves multiple unpleasant timings. A cube sequence with even more ridiculous timings is provided just before the transition to the final portion.

The last phase is at half speed and demands the player to travel as the ship and wave, in both sizes and gravity, through tight and claustrophobic sections with an occasional dimming screen. It lasts roughly 20 seconds until the level finishes. The last screen's random lines spell out "Krazy." It relates to the creator's previous moniker, KrazyMan50.