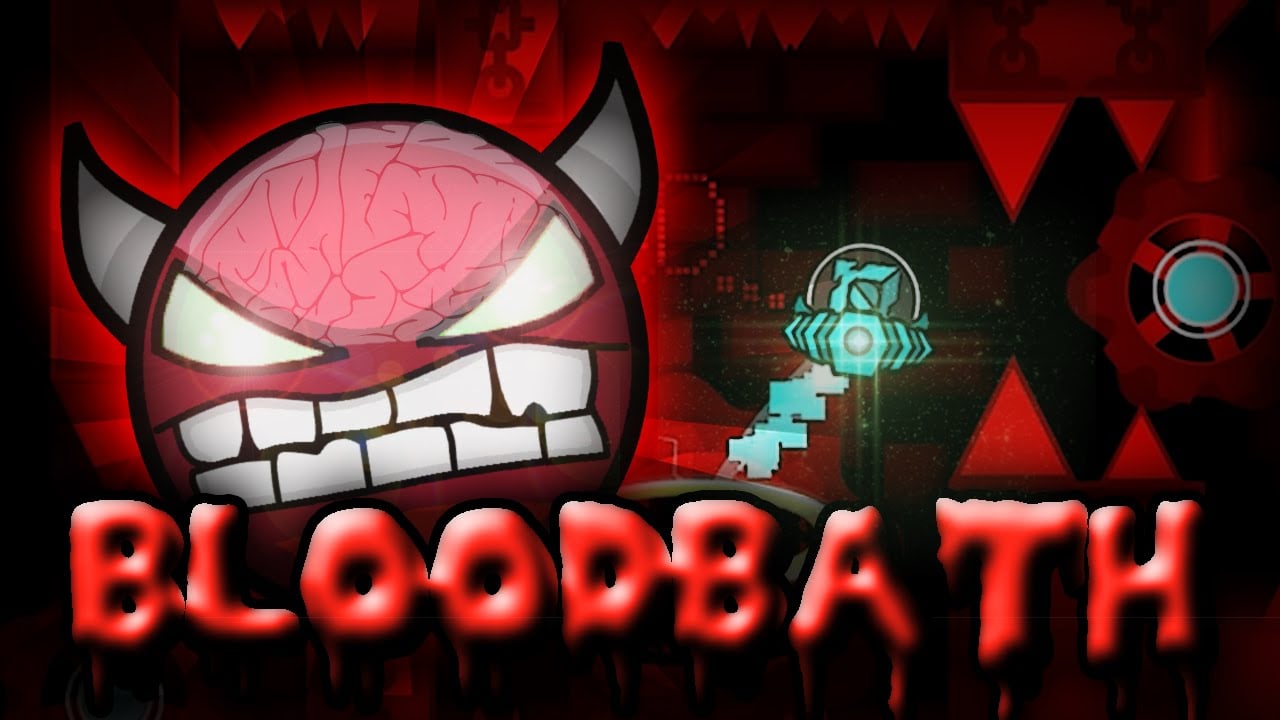 Geometry Dash Bloodbath (abbreviated BB) is an Extreme Demon mega-collaboration level rated 10 stars hosted, verified, and published by Riot. It held the top spot on the Official Extreme and Insane Demon Records list for nearly a year until being surpassed by Athanatos. With over seven million downloads, it is the most downloaded Extreme Demon in the game, as well as one of the most downloaded Demons.

The level begins with a ship game similar to how Ggb0y concluded Cataclysm. The level transitions to a stronger black and red color scheme. If the player glances up, he or she will see a face that resembles Weoweoteo's symbol. A slow-moving portal follows, immediately followed by a double-speed cube and a triple-speed ship sequence, during which the music switches key from C minor to F minor. The triple-speed ship sequence includes flashing colors and a straight 1.5-block area to fly through, all while gravity portals modify the ship's gravity to the beat on a regular basis. The next sequence is a triple-speed mini ball with the same color scheme and flashing items to the rhythm. At the conclusion of the sequence, the ball travels on a yellow pad and through a half-speed portal to the next ship sequence.

The following triple speed ship phase involves maneuver flying rather than straight flight. The gravity changes quickly, with a slope at the end that the player must fly against to reach an open area containing Vermillion's signature. The half-speed ball following the ship phase requires exact timing; each touch represents a musical note. Each platform on which the ball rests is supported by a chain and constructed of red bricks at the corners and black blocks with two lines in the center. Extra spikes make the segment much more difficult, and hexagons adorn the platforms. A mirror portal switches the screen while the player is still playing, with no time for the player to adjust to the reverse direction. Following the backward part, which is themed similarly to the forward segment, the ball is forced through a series of gravity portals while the music crescendos and notes rise louder.

The music abruptly slows down and begins a more tranquil passage in its original key (C minor). The pace returns to normal, and the color palette changes to gray. When the heavy flashing ceases, an innovative cube sequence including triple spikes and a gravity shift takes place. Flickering candles are employed in the backdrop, thorns can be seen on the ground, and chains are used to support the platforms. Following the last triple spike, a 1-block narrow ship sequence begins. The ground and the top are made out of spikes. Following the ship, there is a ball scene identical to the one before. To reach the platforms on top and bottom, the ball will flip through a few one-block gaps formed of two spikes. The spacecraft is followed by a UFO sequence, and the idea is to tap when a player is going to strike a spike on the floor. Because to the exceedingly difficult gameplay, this section is more difficult than the others. Another cube series follows, with additional triple spikes fashioned in the same manner as before, then a very tight wave follows, with a flashing red "MICHIGUN" beneath, bringing the "hallway" to a close.

A twin cube section occurs just before Evasium's portion begins, but just for a second, maintaining the gray color pattern. The music continues to play its soothing tune, and a half-speed flying part with spikes and gears arrives, causing the player to move gently up and down in a wave-like one-space fly. The section's backdrop flashes, exposing more patterns and thorns. The spacecraft transforms into a mini midway through and continues flying in the same manner, with a little lettering reading "Evasium" visible. The ship is pursued by a small wave, while spikes serve as impediments only at the top and bottom of the slopes. When the backdrop flashes, the proper route is presented. A standard wave with gameplay identical to Michigun's wave section follows. A normal-speed UFO follows, complete with fast gravity changes and purple orbs. The UFO shrinks, and as the music speeds up and the pounding begins, thorns and a line of purple orbs appear. A spamming up part is added, and the level reverts to triple speed red and black.

The song shifts to a higher key (D minor), but the melody remains the same, only quicker and more agitated. The scenery becomes blood-red, and the player starts a small ship sequence with treble speed. The gameplay consists of a challenging and chaotic maneuver flying phase that is very difficult to fly through. After a short normal speed portion with a gravity adjustment, the player is thrust into a Clubstep-like "monster" with a half-space flight. Then, within a 1-block tunnel, a yellow leap orb inside the pillar and rising speeds are employed. Following that, there is a lengthy triple speed segment with a mix of maneuver flying and straight flight. The obstacles, similar to Clubstep, are a slew of "monsters" of varied heights where the only safe zones to fly over are the spaces between the teeth. The following cube sequence has some difficult timing and begins at half-speed before increasing pace and giving the player a pause; there is no need to tap. Right before the following part of gameplay, the word "CRACK" appears.

After a triple speed micro UFO phase, the backdrop lightens and flashes to the rhythm. Gravity and size fluctuate quickly, and gears allow a one-space gap to guide the UFO to the song's notes. Clouds and pulsating circles may be seen throughout the level. Midway through, the size changes, leaving a split second of double speed before returning to triple speed. After a second, there is a brief period of half-speed before returning to triple speed. Following that comes a rather simple mini ball sequence at triple speed, with primarily memory-based gameplay. There are more bricks than gears here, and the platforms are gray and red with black light blocks. The platforms fade and brighten in time with the music. One section consists of nine blue spheres in a two-block area, similar to other difficult levels like Silent Clubstep, demanding more mouse or keyboard spamming. Following the spam, "ASONIC" appears as a text in the sky. Following the ball section, the key returns to C minor as an auto cube portion follows, with the edges of the objects flashing chaotically and the backdrop flashing. The auto ends with a split-second of half-speed before resuming to triple speed.

A extremely challenging triple speed regular size UFO that follows the auto in a different way than the others. In the initial ship portion, the soundtrack sounds similar to that of Cataclysm. It's a little more creative, with more ornaments and shine. Soon after that, his name appears in block letters. The player must land on his name and press a pink orb before passing through multiple gravity gateways with leap orbs within. Following that comes a standard speed ship sequence. This section is a little simpler; there are just two blocks to fly through. Players must fly beneath the visible gravity gate, land on the bottom lined with artificial spikes, and continue flying from there. For a split second, the ship mode accelerates to triple speed and approaches the following phase, which is a triple-speed UFO. Three blue leap orbs are touched before the fourth, which is located within a ship doorway. This ship sequence is an extremely uncomfortable straight flight at the bottom, when everything but the player's spacecraft is adorned in black.

A normal-speed ball section follows, with the same style and blocks as Vermillion's, but with leap orbs inside and outside the blocks this time. A mini-portal and a half-speed portal complicate the action by introducing tough timing and undetectable platforms to land on. After a second, the gameplay becomes triple-speed, and four blue leap orbs must be pressed, as the trademark "HAVOK" can be seen, signifying that this is his section. An simpler UFO portion follows, with quick changes of speed and gravity. Saw-blades are discovered instead of gears, held onto the blocks that serve as impediments for the UFO. There are arrows that lead the player in the appropriate direction, while the backdrop pulses to the music. A half-speed regular wave follows. Similar to Acropolis' final wave, the player must negotiate across a one-block straight wave, shifting heights here and there. Right before the following section, the backdrop flashes a stronger crimson to the rhythm of the song.

Giron's segment starts with his distinctive "G" appearing just before his gaming begins. This begins with a challenging triple speed upside down ship sequence. Jump orbs must be touched, and with just 1.5 blocks of space, the flight is chaotic. A rather lengthy 1.5 block straight fly with a standard size ship presents as a danger to the player towards the end of the segment if the straight flying ability is weak. The next part is a half-speed dual with one big and one tiny cube. Consecutive jump orbs are pressed, and the blue one must be tapped very softly to avoid jumping with the top cube. If passed, the word "GIRON" will shine brighter than the other blocks, with chains linking it to the other blocks and the floor. A tiny non-dual auto, lasting around.4 seconds, concludes the segment and transports the player to the last portion of the level.

The player then enters a half-speed ball section identical to the one seen in the middle of Cataclysm. The phrase "your blood" may be seen vanishing from view when red blocks with chains are visible serving as platforms. Following a blue jump orb that requires exact timing, a one-second UFO with a single leap and a blue jump orb follows. This results in a tight, short, upside-down straight fly capable of causing death. The ship sequence is similar to the ball sequence that follows it in that time is crucial. The last ball part includes a slew of false blocks placed up in a desperate attempt to make the player to fail. The name "GBOY" may be seen as blocks in the ceiling at the conclusion of the scene.

The last notes include a one-speed cube auto with "GG" on top and "RIOT" on the bottom. There is one more set of "invisible" triple spikes that the player must leap over to avoid a very frustrating and unpleasant fail at 98% or 99%. An additional path may be taken by performing an extremely accurate leap at the conclusion of Ggb0y's segment (just after the blue jump pad), which will put you on top of the "GG" message and reveal "Michigun" as an Easter egg. The level then concludes with a single heart ornament floating in the sky above the last leap.