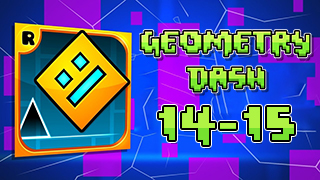 Conquer Clubstep, the first demon of Geometry Dash's 21 levels with difficulty up to 14 stars, and tackle Insane level: Electrodynamix quickly!

Clubstep is the fourteenth level of Geometry Dash and the first level with a Demon difficulty. For this level to be unlocked, players need 10 secret coins. Have a Demon difficulty, Clubstep is more tough than its predecessors, with intricate moves in confined places and little time to react, which is more difficult by the presence of deceptive obstacles. Clubstep includes potentially confusing phony spikes, fading spikes, and fading blocks. Frequently, fading spikes are coupled with false spikes to make them harder to detect. During cube and ball sequences, hazardous rings are typical. During cube sequences with combinations of pads and rings and ship sequences with gravity portals, gravity shifts are noticeable, demanding well-developed ship-handling abilities. There are 38 'devil face' constructions scattered around the level, which are constructed of blocks, varied spikes for teeth, and spinning decorations, pulsators, or rings for eyes.

Clubstep, Cycles, and xStep are the only levels where completion in practice mode rewards icons. Moreover, Clubstep is the only level that awards a UFO. Clubstep takes 90 seconds and a minimum of 89 hops to finish.

Electrodynamix is the fifteenth level of Geometry Dash and the fifth level with an Insane difficulty. Electrodynamix presents the new speed gateway, which includes the fast and extremely fast variants. With such a progression of rising speeds, the difficulty of the game increases as it proceeds, especially during multiple ship sequences through narrow corridors while traveling at these greater speeds. The UFO experiences antigravity for the first time in a sequence that is instantly challenging and has no lower level of introduction. In addition to introducing blocks and decorations with predetermined color schemes, this level is the first to use a new backdrop. Electrodynamix needs a minimum of 81 leaps and 84 seconds to finish.

Thanks to CrystalKeeper7 from Scratch for this project!