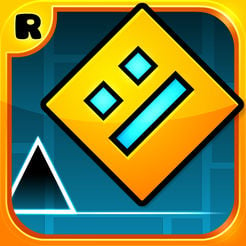 Geometry Dash is a series of five video games developed by Sweden-based developer Robert Topala, and published by his company, RobTop Games. The principal game, Geometry Dash, it is a rhythm-based platforming game which currently has 21 official levels and has more than 40 million online levels made by players. Check out the full version for new levels, soundtracks, achievements, online level editor and much much more! The following is a rundown of all of the available levels:

Levels of difficulty ranging from tough to almost impossible. The game's simple controls make it easy to understand right from the beginning. Excellent music that push you to continue to the next section of the tune. Interesting gameplay that is linked to the rhythm.

Geometry Dash Lite is a free version of the game with advertisements and gameplay limitations. This game contains 16 levels but does not allow the user to build and play new levels. It also features fewer character customization options, omitting many of the symbols and colors included in the main game.

Topala launched a spin-off game called Geometry Dash Meltdown. It now has three levels with tracks by F-777 as of version 1.0. The game includes new icons from version 2.1 as well as level enhancements from the original game's version 2.0.

Geometry Dash World is an excellent addition to your gaming library. This game features two worlds with five levels each, new 2.1 icons, a store, a new vault, daily quests, levels, and prizes, and chests (as of version 1.0).

Robert Topala announced the release of a third spin-off game, Geometry Dash SubZero, on December 21, 2017. It is divided into three tiers. It is presently the most recent indie game in the series, and the first to provide some of the features of the main game's unannounced 2.2 upgrade (as of June 2022), like new icons and trigger camera controls.

User Levels are unofficial Geometry Dash levels made by players using the built-in level editor. Depending on the complexity and quality of a level, ratings may be assigned to it. There are three different categories of ratings: star, feature, and epic.

Easy levels are those that end with a 2 star reward. Other than auto levels, these are the easiest levels to finish and have the lowest degree of difficulty.

Normal levels are those that end with a 3 star award.

Hard levels are levels that reward 4 or 5 stars when completed.

Insane levels are levels that reward 8 or 9 stars when completed.

Demon levels are levels that reward 10 stars when completed. They are the most challenging levels in Geometry Dash, and finishing them generally takes a lot of practice and effort. Update 2.1 further splits Demon levels into 5 tiers of escalating difficulty:

Also if you want to explore more games in the same genre as the popular Geometry Dash base game, check out our list below: Dash Games. Here you will find other famous versions like Geometry Dash Ice Cave, Geometry Dash Utopia Dash, Geometry Dash Glorious or Geometry Dash Megalodon.... and many more interesting games. So, what are you waiting for? Now is the time to discover with us!

The player controls the block's movement via input in the form of a press or hold, with the objective of finishing a level by reaching its end point. If the player causes a collision with an obstruction, the level will begin again from the beginning. The only exception to this rule is the practice mode, , in which the user may add checkpoints to inspect or train the level without it being officially finished. The timing and rhythm of the music in the game are key aspects of the game that are often linked.

If you want to be successful, it's important to time your movements to the pulse of the music. Continue to maintain your composure, if you aren't worried out, the game will be lot easier! Practice! Over time, you will become more adept at the tiny motions that will allow you to go forward. Share your accomplishments and benefit from the experiences of others.

Thanks to griffpatch from Scratch for the original project Geometry Dash v1.5!