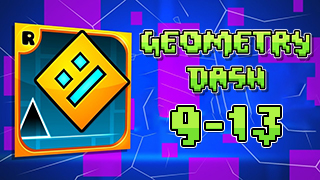 Test your agility with five exciting Insane levels of Geometry Dash including Cycles, xStep, Clutterfunk, Theory of Everything, and Electroman Adventures.

Cycles is the ninth level of Geometry Dash and also the third part of a Harder with a maximum difficulty of 9 stars. Cycles allow players to enter the ball shape by using pads, rings, and gravity portals. Triple spike combinations and deceptive jump pads or rings leading to danger are commonplace in the initial cube sequence. The gravity changes dramatically during the single-ship sequence. Only the Cycles, xStep, and Clubstep levels reward icons for completion in practice mode. Cycles is the only level where you may exit in a ball shape and are not affected by the mirror portal. An absolute minimum of 88 leaps is required to finish Cycles in under 82 seconds.

xStep is the tenth level of Geometry Dash and the first level of an Insane difficulty, with a rating of 10 stars. xStep introduces a number of new level components, such as block designs and pulsators, with new decorative additions becoming more common in later levels. It also temporarily adds the blue gravity pad and ring during later phases, making movements more complicated. Although they are not fully introduced until Clutterfunk, xStep has a little spike that must be hopped over when trying to get the third hidden coin. xStep takes 84 seconds and a minimum of 81 jumps to complete.

Clutterfunk is the eleventh level of Geometry Dash and the second part of an Insane difficulty rated 11 stars. The saw-blade danger is introduced by Clutterfunk. It also increases the portal's size and includes portions under its effects for all forms, as well as a number of small-scale items, greatly increasing gameplay variety.Because of the tiny size and intensive usage of pads and rings, as well as the frequent fluctuation of gravity, the cube sequences get increasingly challenging, demanding quick responses and accurate timing. The ship scenes are significantly smaller. The single ball sequence is more intense, with more rings and gravity portals used.

Only the Clutterfunk and Electroman Adventures levels award ships when finished in standard mode. Clutterfunk takes 99 seconds and a minimum of 125 leaps to finish.

Theory of Everything (Insane 12☆)

Theory of Everything is the twelfth level of Geometry Dash and the third part of an Insane level with difficulty rating of 12 stars. The magenta jump pad and ring are first shown in this level. During cube and ball sequences, they are commonly combined with other pads and rings. Additionally, elements relating to the size of the portal and the UFO shape are added. During ship and UFO scenes, dangerous alternative pathways often surface, and arrow pulsators show the right way to go. Theory of Everything takes 86 seconds to finish and calls for at least 62 leaps.

Let's try Theory of Everything 2 now if you're hooked on this level!