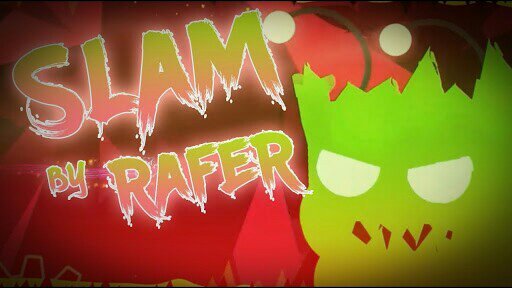 Geometry Dash SLAM is an Epic Harder level created by rafer (rafer300). It is the first level of Monster Gauntlet, with a difficulty rating of 7 stars and 3 user coins. In Geometry Dash spin-off level series, there are only three stages that are XL in length: The Behemoth from Death Gauntlet, SLAM from Monster Gauntlet, and Scarlet Surge from Chaos Gauntlet. In both gauntlets and map packs, the latter takes the longest for any user level to accomplish, taking 175 seconds. When levels had to be rated 8 or 9 stars to be qualified, SLAM from the Monster Gauntlet was given a rating of 7. However, it was found during the judging that the inventor had initially asked for 8 stars, so the level was nonetheless included.

0–7%: Easy cube section to start. The player triples speed as the beat lowers. This segment's initial orb must be touched late to open a coin-route hidden path.

8–19%: A ship portion with minimal obstructions follows. Then, UFOs. If the player uses coins, this cube contains a key. First a ball, then a ship. (inverted coin).

20–24%: A sluggish cube and robot part follow. The currency path keeps the player in anti-gravity and unlocks a portal. The portal teleports the player to a question-marked labyrinth. The player must obtain this coin at 24%.

25–44%: His initial assault blocks the screen's top and bottom. If the player selects the currency way, at 25%, they must strike a block (when not hitting the orb at 24%) to create a friend and defend him from the monster. His second strike involves head-launched rockets. (The third missile misses and is safe.) The player must keep low to dodge the boss's flying block. Then you slam the monster. After the monster retreats, the player enters a triple-speed microspacecraft. Boss's ultimate attack is antenna lasers.

45–50%: After defeating the monster, a cube segment follows. The player goes beneath the regular route, up a hill, and to the coin at 48%.

51–76%: The player must activate multiple triggers to acquire the third coin. The player enters a somewhat safe ship segment. The wording on the tiniest bit of paper in the world.

77–100%: The last boss is the first boss's skeleton. (Slime Monster's) lava-burned skin This segment is simple, like the level. Just follow the arrows. "FINISH HIM" and a heart emerge at the conclusion. After that, the player crashes into the boss.