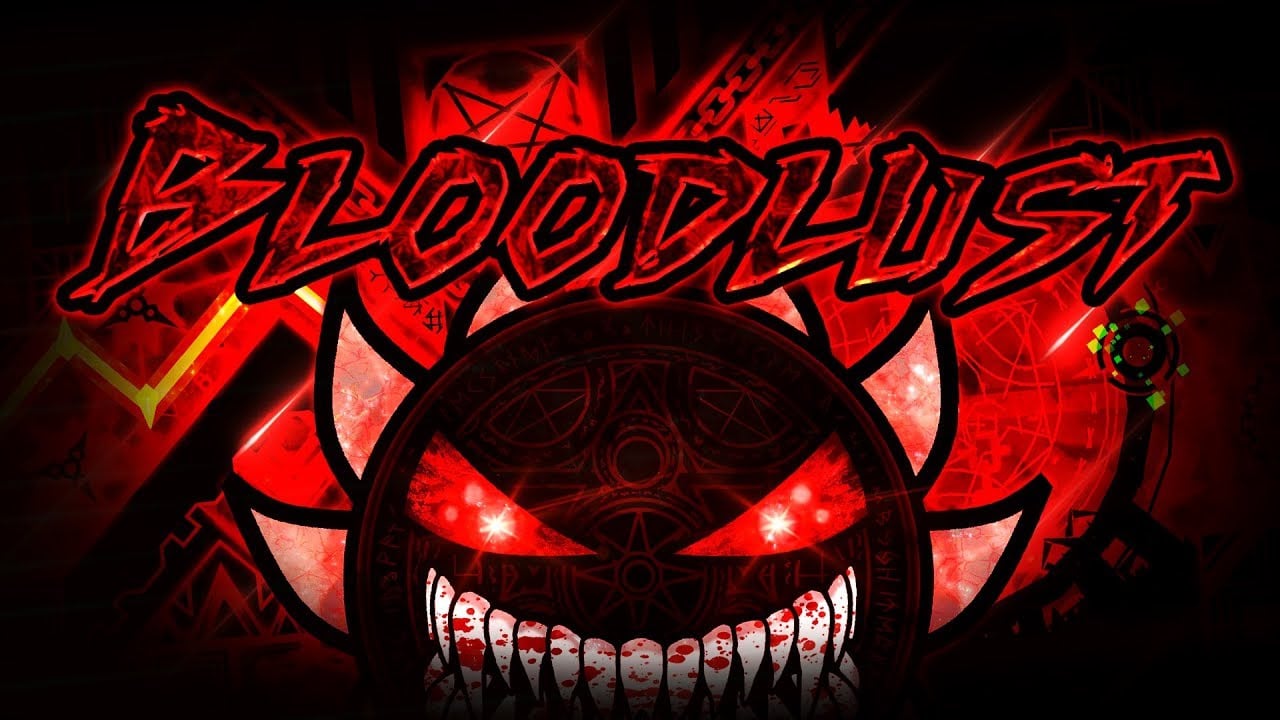 Bloodlust began shortly after Riot finished Sonic Wave Infinity, but Manix648 was inspired by the concept of making a 2.0 remake of Bloodbath, just as Riot did with Sonic Wave.

On May 6, 2016, Quasar posted his second look at Bloodlust, which gave more information about how the game works.He observed that this level was currently nearly as difficult as Yatagarasu.

After Quasar left Bloodlust, Manix648 looked for a new verifier and chose Knobbelboy, a talented Dutch player and creator known for making levels like Dark RainBow Rebirth and Crying Souls.

After that, Bloodbath starts like the original. Unusable Low Detail Mode key can be collected. Manix648 and knobbelboy's nicknames appear at the top. After exiting the tunnel, "DIE!! " appears. Bloodbath's first straight fly ship phase is replaced by a triple-speed micro wave part. Weoweoteo's rest is like Bloodbath but boosted. knobbelboy added a text box saying "WEO WHY ARE YOU THE WORST GAMEPLAY CREATOR EVER!"

The tiny ship segment includes a few extra obstacles, but the gameplay is essentially the same. Manix didn't like the deco and knobbelboy didn't like the gameplay, so they swapped. Due to complex timings and orb timings, the new segment is harder than Vermillion's original. Bloodlust is displayed before Michigun's portion.

Namtar recreated Crack's revised segment, making it harder to enter the "tunnels" due to additional obstacles and narrower areas. Before ASonicMen's part, the cube is essentially unchanged.

Visual changes have been made to ASonicMen's recreated portion, with fewer saw-blades and more spikes and walls in their place.

The ball element was replaced with a ship sequence and UFO piece featuring diagonal flight and tight gaps. The last part before the auto cube section is a hard, short half-speed swing-copter segment. Auto cube section shows "monster" with "Prepare..." wording. The player must jump off the auto cube or hit an invisible spike.

Etzer's redone part is largely the same, except for the "Keep going" lettering at the bottom and constant gravity adjustments that make it difficult. Due to narrower gaps and more gravity shifts, the UFO part is harder. A 8), depicting Etzer's YouTube emblem, and a text box saying "The Curse" because knobbelboy died there 12 times before passing the verification.

Havok's redone portion has adjustments to the gameplay and visual effects. Due of tricky timing and numerous orbs, the ball section is more difficult.

This section is a brief mini-UFO with numerous difficult timings.

This segment begins with a severe wave like Bloodbath, with an antigravity gateway halfway through. "Havok... Again" appears. The wave transitions into Giron's redesigned phase, which is harder due to a "dark/corridor effect" and tighter ship sections. "Keep Going" replaces Giron's signature on the dual cube.

Ggb0y's redone segment is largely the same, except for the embellishments. The player must take the Michigun method (jumping over the "GG" blocks instead of sliding down) or fall onto the spikes below. "Or not?" appears next to "GG" bricks. Rustam created this artwork.

The extension begins with Michigun's "monster" "carrying" the player with the words "It's not over..." After that, there's a triple-speed ship sequence with gravity shifts and a challenging robot segment. Weoweoteo made this portion for Yatagarasu.

After that, a half-speed wave portion with tight passages appears. Fast-paced UFO and ball gameplay concludes this part.

The player goes through numerous difficult flying sequences involving portals and UFOs.
Next is a tight tunnel with spikes and changes (Terron). Portals affect the player's gravity and form. After this, a challenging cube portion with several jump rings, a short ship segment, gravity and size changes, and a mini-wave section follow.

This opens with a straight-flying ship sequence. Form and gravity fluctuations make this passage tough. Straight flying ends the section.

Near the finish, fast-paced passages cease and the player slows down, with the "monster" to the left. The player becomes half-speed forms. Slower, it demands strong timing and competence. After the section closes, a gigantic crimson moon with "Bloodlust" appears in the sky. A triple spike appears as the final barrier of the level; if you cross it, the level ends. "Decoration: Manix", "LDM: Joshuawall", and "Verification: knobbelboy" appear when the player finishes the level, along with the developers, art designers, and Manix's dedications. Knobbelboy's favorite Neptunia Games character, Noire, is referenced in a text box before the triple spike.

"Your thirst for blood continues? Very well, let the blood spill. Let the demons feed off your unfortunate soul... ” ― Knobbelboy