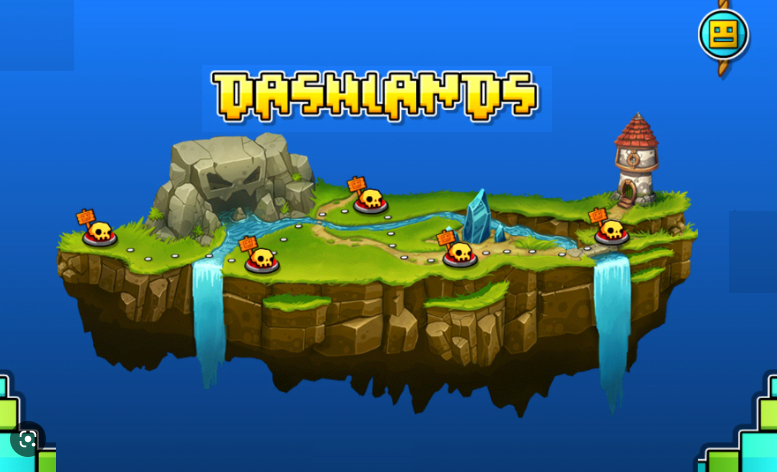 Find your way through the land of Dashlands, the first world in the famous game Geometry Dash World. Dashlands has five levels, with short to medium lengths, and players need to play in sequence.

Players may get 450 mana orbs, 13 stars, 4 colors, and 1 cube as their total prizes. The second world that followed Dashlands became known as the Toxic Factory. The whole music for the Dashlands level was written by Dex Arson.

Payload is the first level of both Geometry Dash World and Dashlands. In a single sequence comprising blocks and spikes, the cube shape is introduced. Payload needs a minimum of 27 leaps and takes 27 seconds to finish. The shortest major level is this one.

The second level of both Dashlands and Geometry Dash World is called Beast Mode. One cube sequence, introducing the yellow jump pad, makes up the whole thing. Beast Mode demands a minimum of 29 leaps and takes 32 seconds to finish.

Machina is the third level of both Geometry Dash World and Dashlands. It is made up of one cube sequence that introduces the yellow leap ring and the ship shape at 63%. It takes 33 seconds and a minimum of 25 leaps to finish Machina.

Years is the fourth level in both Geometry Dash World and Dashlands. It consists of a single ship sequence that has moving elements. Years is completed in 33 seconds, with no leaps.

Both Dashlands' and Geometry Dash World's fifth level is called "Frontlines." One cube sequence, introducing the gravity portal, makes up the whole thing. Frontlines demands a minimum of 29 leaps and takes 30 seconds to finish.

Thanks to chikomastr from Scratch for this project!