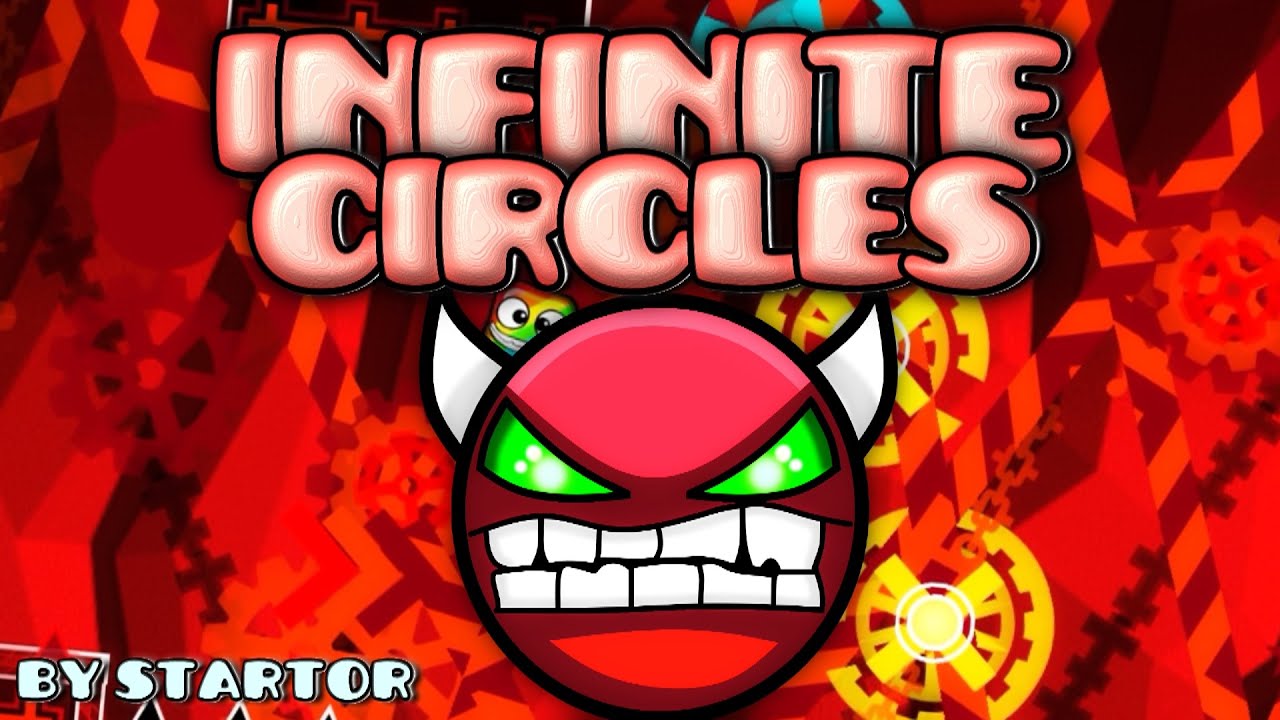 Geometry Dash Infinite Circles is a solo Easy Demon level rated 10 stars and 3 user coins created by Startor. It's a simple Nine Circles level and has a fire-themed design. It is particularly popular due to its difficulty, outperforming numerous earlier levels. It is regarded as one of the simplest Nine Circles Demons. Because a major section of the wave at half-speed, the level is fairly simple. This implies that instead of the usual challenging triple-speed wave, the player may rest for the most of the time on this level. Furthermore, there are no phony lines in this level. Despite this, this level has several vexing portions. Unlike the bulk of Nine Circles Demons developed with Update 1.9, this level has a brilliant crimson-like hue and employs text. However, the current version has altered the color of the wave area to a deeper, red.

This level begins with a basic cube section with fake spikes and triple spikes. It is obvious that this level will be Nine Circles. The player is then taken to a somewhat annoying ship sequence that has a few glitches, awkward timings and lots of spikes. The player then enters an auto cube segment, where they bounce on jumppads. The music begins to build and you can see the text "INFINITE CIRCLES".

The music stops and the player is now in a three-speed wave. Although the wave is initially difficult, it becomes much easier in the second 10%-20%. After several double, triple, and half speed changes, the player encounters an annoying bug at 44%. This is a gravity portal and can throw the player off their feet if they get too close to the top slope. After a few more speed changes, the player begins to settle down and transitions into a half-speed wave that gives them a very lengthy break. The player will be confronted by a short, but irritating, dual section later. This section, however, is very difficult without being skilled at "spamming" or the wave. The rest of the wave can be completed at half speed, keeping the cubes in place.

The music stops and the cube returns to the beginning in a short, easy segment that has the same characteristics and decorations as the beginning. The level ends with a short wave in which the player must maneuver just above the giant Zobros-styled signature by Startor. The gray-colored skull trigger is used to get the last coin. However, the player must touch it in order to receive the final coin.

Three user coins are available at this level. These two coins are very easy to get, while the third is slightly more difficult.