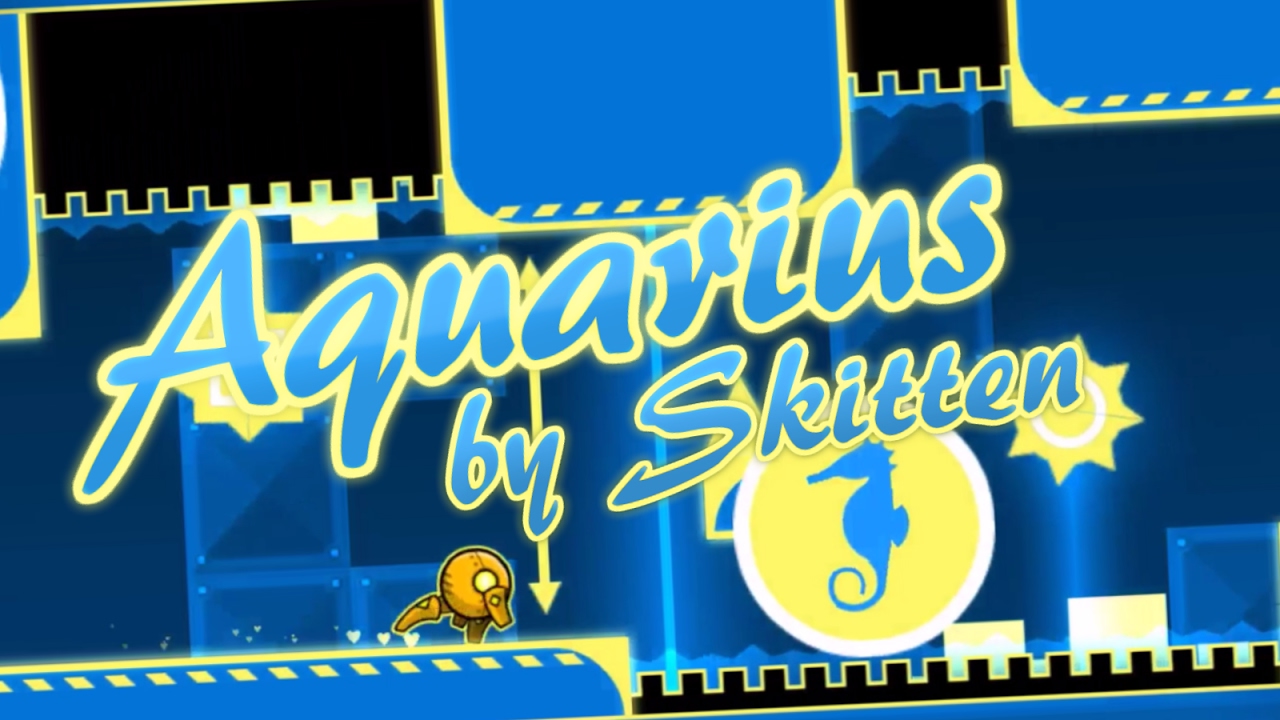 Geometry Dash Aquarius is an epic Harder level rated 6 stars and 3 user coins created by Skitten. This is the Magic Gauntlet's second level, which has an underwater ocean theme. A dolphin motion at 20%, "sea creatures," and a gradient backdrop that resembles water are just a few of the embellishments that give the impression that the player is submerged in the game's world. The fast transitions, especially near the level's end, that demand players' quick thinking, along with a little bit of random mashing, make up the majority of the level's difficulty.

Aquarius begins with a simple mini-cube section with simple jumps. A simple spider segment with clear timings and orb attacks follows this section. The spider part's auto cube portion leads to the opening drop of the level, which shows an animation of a dolphin diving into the water. Following a short UFO portion with some moderate timings, the player shifts to a brief wave segment with some mashing. The second, shorter UFO portion, which is a bit easier than the first and has moderate timing, continues the wave. This causes a transitional cube to form, which, after a few changes in gravity, changes into a ship section. Before changing into a standard ball, the spacecraft enters a microball phase with a few orb hits.

The following section is a simple robot segment with only a few light timings and hops.The robot then enters automated mode and moves a small cube part using basic timings and little pressure. A floating cat icon may be seen on the screen in this part. The cube changes into a little robot while the cat continues to float on and off the screen. In the robot phase, there are a few moving objects and orb hits, which transition to a straightforward ball component when the cat exits the frame. The ball section is followed by a straightforward ship component with a little fluctuation in gravity. The level's main drop is located after the spaceship and has the phrase "Go!" in ornate lettering. The next cube section requires fairly quick timing since it is moving at double speed. The player then enters a short UFO segment that has strict timing constraints and little memory demand. A short, straightforward spider portion is followed by a wave sequence and a ship sequence. The following step, a robot, is perhaps the toughest since it calls for fast decision-making and timing while moving at double the pace. Following the robot, there is a short autopart that leads to a simple ball segment with a few jump orbs as the closing segment. The name of the level, Aquarius, is then shown once the level concludes.