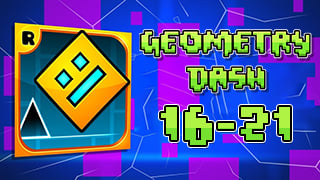 The last six levels of Geometry Dash, with a minimum difficulty of 10 stars, will be a really tough challenge for players. Play for free right now!

Hexagon Force introduces new sloped blocks, which give the icon more ways to move and interact with the level. For example, sharper angles give the icon more vertical momentum. The level also introduces the dual portal, which has more complex gameplay and requires you to pay more attention to be able to move two icons on planes that are upside down. The dual portal affects parts of the cube, the ship, and the ball. Both parts of the ship are the same, so you can usually focus on one while the other stays out of harm's way. Both the cube and the ball have two parts that aren't the same size, so both need to be watched. There are also jump rings on them. Sometimes, one icon has to move while the other one is in the air. There are sometimes arrow pulsators to show when to jump. Normal-speed portals restore movement speed to normal, whereas slow-speed portals need a different approach to be utilized securely. Hexagon Force takes at least 103 jumps and 92 seconds to finish.

Blast Processing is the seventeenth level of Geometry Dash and the fourth level of a Harder difficulty rated 10 stars. This level adds 3D embellishments to fill out the level. It also introduces the wave shape in long, uninterrupted sequences. Although artificial slopes are included in Blast Processing as part of acquiring the first hidden coin, they are not fully presented until Theory of Everything 2. The only levels with a wave gateway after the first cube section are Blast Processing and Deadlocked. Blast Processing takes 102 seconds and a minimum of 65 leaps to finish. This also makes it the official level with the longest duration, followed by Geometrical Dominator (100 seconds) and Clutterfunk (99 seconds).

Theory of Everything (Demon 14☆)

Theory of Everything is the twelfth level of Geometry Dash and also a Demon level with a 14 stars difficulty rating. The magenta jump pad and magenta jump ring are introduced in this level, and they are commonly utilized in conjunction with other pads and rings during cube and ball sequences. In addition, the UFO shape is presented, along with elements concerning the size of the portal. During ship and UFO sequences, dangerous alternative pathways occur on a frequent basis, with the right ones highlighted by arrow pulsators. Theory of Everything takes 86 seconds and a minimum of 62 leaps to accomplish.

Geometrical Dominator is the nineteenth level of Geometry Dash and also a Harder level with a 10 stars difficulty rating. This level features numerous new elements, including the robot game mode (which can make lower and higher jumps by tapping and holding down), the alpha trigger, the move trigger, the pulse trigger, the toggle trigger, monsters, animated thorns, water, bushes, flowers, in-game text, and many new decorations. For a short period of time inside the level's memory region, small glowing stars will appear to show the symbol exactly where it needs to travel. It takes at least 76 leaps and 100 seconds to finish Geometrical Dominator.

Deadlocked is the twentieth level of Geometry Dash and and have a Demon difficulty 15 stars. To unlock this level, players must collect 30 secret coins. Deadlocked adds new elements to levels, such as the green jump ring, which changes gravity by adding more speed (like the yellow anti-gravity jump ring), teleportation portals, which send players to a different location from a linked portal along the Y-axis, and keys and keyholes (which serve as a visual guide for touch-triggered triggers; however, green inverted-square triggers were used in Geometrical Dominator). At 64%, there is a "boss fight" segment. The level also uses triggers in a more advanced way to make "laser-shooting monsters," which can be seen in the first segment of a normal-sized UFO at 64%. The wave gives you your first taste of antigravity, which you will see in the second wave sequence.

Only the Deadlocked level gives 15 stars, which is the most you can get from any level. Many players think that the official level "Deadlocked" is the hardest one. Deadlocked can be finished in 99 seconds if you jump at least 98 times.

Fingerdash is the 21st official level of Geometry Dash and has a 12 stars Insane difficulty. In this level, players will use the spider form, which, like the ball form, can alter gravity by touching it, but instead of just rolling off one surface and onto another without losing speed, the spider teleports to the next opposite solid surface. In addition, the level introduces new elements such as black rings that, when interacted with, cause the player to fall in the direction of gravity; green and magenta dash rings that cause the player to move in a straight line for as long as the screen is held, with the green retaining gravity and the magenta switching gravity; red jump pads and rings that launch the player higher than a yellow jump pad or ring; rotating objects; new triggers; lasers; and a wide variety of new decorations. In order to accomplish Fingerdash in under 85 seconds, you'll need to do at least 79 leaps.

Thanks to chikomastr from Scratch for this project!