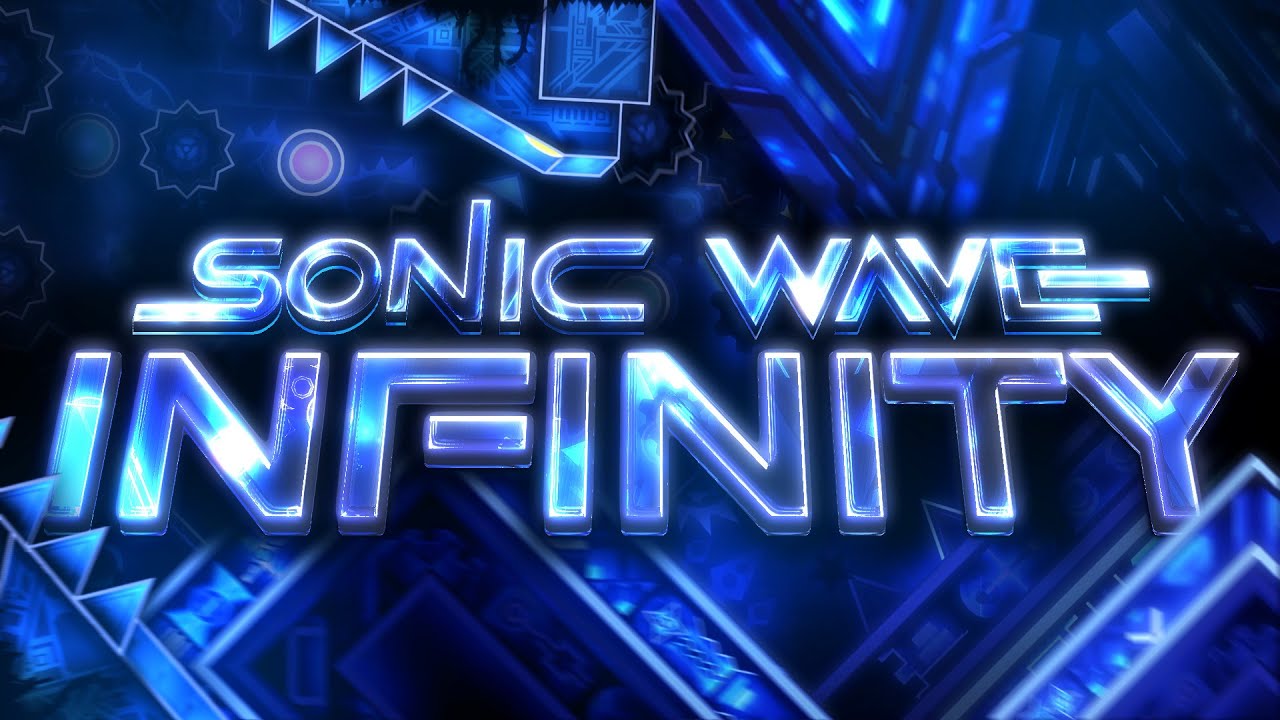 Geometry Dash Sonic Wave Infinity by Cyclic, APTeam, and Riot, and more is an Extreme Demon Level rated 10 stars. Sonic Wave Infinity is an Extreme Demon collaboration made by Riot and Viprin, redecorated and released by APTeamOfficial, and validated by Xanii. It is, as the name implies, a darker and buffed replica of Sonic Wave made by Riot because he thought the original Sonic Wave uninteresting. It is a darker and more difficult variation of Sonic Wave. Riot gave it to the APT crew to renovate after being pleased with their work on Apocalyptic Trilogy.

The level starts with a basic normal-speed cube segment with a few orb timings. A few spikes protrude from jump pad sections. Some platforms require the player to carefully timing their orbs. A brief auto portion leads the player into the following stage.

The next portion is a double-speed ship segment that varies in gravity and size multiple times. The player must move awkwardly over slopes, spikes, and gears. The ship's speed drops to half-speed three times throughout the journey, and the player must do a quick mini-ship "straight-fly" between four spikes. The portion concludes with a semi-auto double-speed mini-cube section with just a single blue orb timing.

The player moves onto a half-speed ball area with a few orb timings and steep buildings. The player then becomes small for four orb timings before returning to normal-size, where they must time their inputs to avoid spikes on the platforms. After a changeover to double-speed, there is a triple-speed mini-ball dual part where the player must dodge the spikes on the ground and ceiling with both symbols, like in Windy Landscape at 50%. A triple-speed cube transfers the player onto the next section while lettering reading "Sonic Wave Infinity" momentarily appears on the screen.

As with other Nine Circles levels, there is a triple-speed wave part with flashing and pulsating décor at the drop. This section has very tight passages and two gravity gates that appear in quick succession to throw the player off. The majority of the constructions feature spikes on the walls, which make the spaces even smaller. The wave gets tiny halfway through the section. To dodge the gears, they must go up and down to the rhythm of the music.

This segment includes blocks that extend from buildings to improve playability. On the walls, there are also additional sawblades and spikes. It begins with a triple-speed wave that necessitates some difficult maneuvering, followed by a twin mini-wave with slanted buildings and spikes on the ground and ceiling that the player must avoid.

The following section starts with a triple-speed mini-wave segment that demands the player to release go and instantly tap to dodge the spikes on the ground and ceiling. The player must perform it numerous times in a row, with a gravity shift in the middle. Following that, it's a normal-sized wave with additional uncomfortable navigating around octagonal blocks that serve as sawblades, followed by a mini-wave portion with some spam at the start and two incredibly tight gaps made by expanding spikes at the conclusion.

A few spam parts as a triple-speed wave with a few gravity portals in the midst make up this segment. Following that comes a mini-wave segment with additional spam, followed by a section requiring incredibly uncomfortable and precise movement around oddly formed buildings with protruding spikes. The section concludes with a short but precise mini-wave spam around sawblades.

This segment is a cube with a ton of orb timings. The speed begins at half-speed and increases to double and triple-speed. The orbs did not need to be timed particularly precisely in the original level, and spamming permitted the player to clear this section. The updated version, however, has sawblades that compel the player to timing some of the orbs.

After that, the player encounters a triple-speed wave segment with not just very tight areas but also moving buildings. A little distance in, the pace drops to half-speed, and the player must make three perfect inputs. Then comes a triple-speed twin wave portion in which the player must dodge saw blades in the middle of the screen as well as spiky constructions moving in from the ground and ceiling.

The next portion is a triple-speed wave segment that is substantially brighter than the rest of the level. The player must avoid buildings and sawblades once more, as well as pass through fakes twice. After a few gravity portals, the pace decreases to half-speed for a short while before the level returns to triple-speed gaming.

Like a triple-speed wave, the player must spam between two triangular constructions with protruding spikes, after which the wave shrinks and must again move up and down to the beat of the music to avoid the sawblades, as in LuisLuigi's section.

As a half-speed mini-wave, the player must spam up a hill while avoiding colliding with the sawblades above. The player must perform the same thing after a fast plunge into a narrow gap between two buildings, only they must spam slowly downwards. After a few tight passageways at half-speed and standard speed, as well as gray slopes covering up the buildings, there is a gap between several spikes and a gear that requires spamming through. The section concludes with slightly tighter mini-wave gaps.

This portion is a memory cube segment that begins at normal speed but transitions to triple speed halfway through. The memory is made up of pillars with gaps. Some are bogus, and the player must remember whether to leap or fall to the next level. There are also blue jump pads in the pillars that may alter gravity and cause them to get confused. Following that, a brief semi-auto half-speed cube section leads to the level's final gameplay section.

The last gameplay part begins with a very tight triple-speed wave with additional spiky structures, gears, and gravity portals that the player must clumsily navigate around. The player must accomplish similar gameplay to the mini-wave halfway through. Following that comes a normal-size half-speed wave segment with a few gravity portals that need minor wave motions to avoid spikes. The player closes with some double and triple-speed mini-wave spam over some gears and spiky structures after a similar section at ordinary speed.

The level's last section is the end screen, which has an ornate backdrop and spectacular effects. It begins by mentioning the hosts, Zimnior12 (also known as "Zim12") and Riot, as well as the verifier, Xanii. Their cube symbol displays on the right side of the screen at the same moment. The perspective then pans upwards, with the names of the designers of the separate components, the end screen (Tribar), the end screen backdrop (Nickalopogas), and the initial level (Cyclic) scrolling. Finally, the screen fades to black, with the phrase "GG" appearing in the bottom right corner, signifying the end of the level.