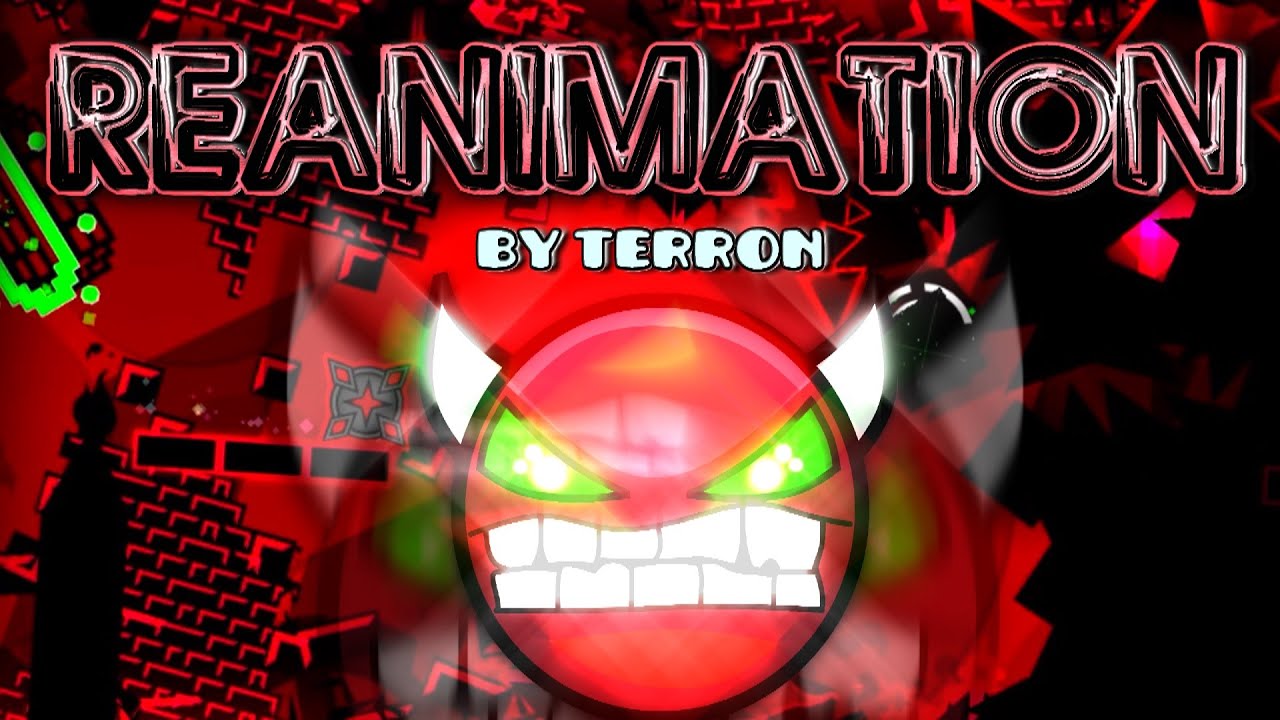 Geometry Dash Reanimation is a Medium Demon rated 9 stars created and verified by Terron. On December 20, 2015, it was made available. In Viprin's Creator Contest 5, the level came in first. Due to its thematic, imaginative, and visual parallels, the level is sometimes regarded as an unofficial successor to Death Moon, another well-liked Demon level by Caustic (FunnyGame). Like its predecessor, the level won praise for its music, gameplay, design, and 2.0 effect implementation. The length and decoration of the level contribute to its difficulty mostly because it might be hard to tell where the player is heading at times. It comes before Temporium and Zetrallio.

The first part of the level consists of a double-speed cube segment that is rather straightforward to time. Both the wave and the subsequent ship sequence are straightforward but a little more difficult. The micro cube starts off similarly easy but subsequently gets dual and eases up much further. Following the dual, the level automatically transitions to the word "NEVER GIVE UP," rotating between the ball, UFO, and finally the robot, from whence the first challenging portion is started. The complexity of the robot, UFO, and ship all change quickly and are quite easy, but the wave is somewhat challenging and calls for precise timing and mashing abilities to avoid crashing both during and after the wave, when the player switches to the cube. This cube soon transforms into a little ball, which alternately appears as a ship, wave, ship once again, and a UFO. While first challenging, this becomes easy with practice. The ship sequence has Chinese characters (), which translates to "Death Moon".

The next cube, UFO, wave, and ship sequences are all rather straightforward, with the robot being a little trickier. The following cube transforms into a car, a ball, a UFO, and a robot, all of which are straightforward and not difficult with a little practice. If the player can't straight fly, the following phase, a twin micro ship, is somewhat challenging. The next dual wave is similar, but time is the key component. The cube enters an auto segment, followed by a brief and straightforward cube part, and then enters the second and longest auto segment, which depicts a monster putting the "Death Moon" back together. After that, the player is attacked from behind by this creature, who then launches them into the air before transforming into a boss that must be defeated. The portions involving the UFO, wave, cube, robot, and ball are all rather easy. Although the next ship sequence may be more difficult for those who struggle with straight flight, the UFO is tougher due to the possibility of death from colliding with a saw-blade. The cube/ship changeover segment is likewise quite straightforward and not very difficult to execute. The game closes with a difficult to see wave portion after the last cube, which only calls for three leaps. If this is accomplished, the level concludes with an auto mini cube part that displays Terron's name and the Chinese character for "Reanimate" (Fukatsu in Hepburn), after which the level is finished.

There are 3 user coins in this level. They are hard to find due to the high level of detail and triple speed, but they are easy to get once you do.