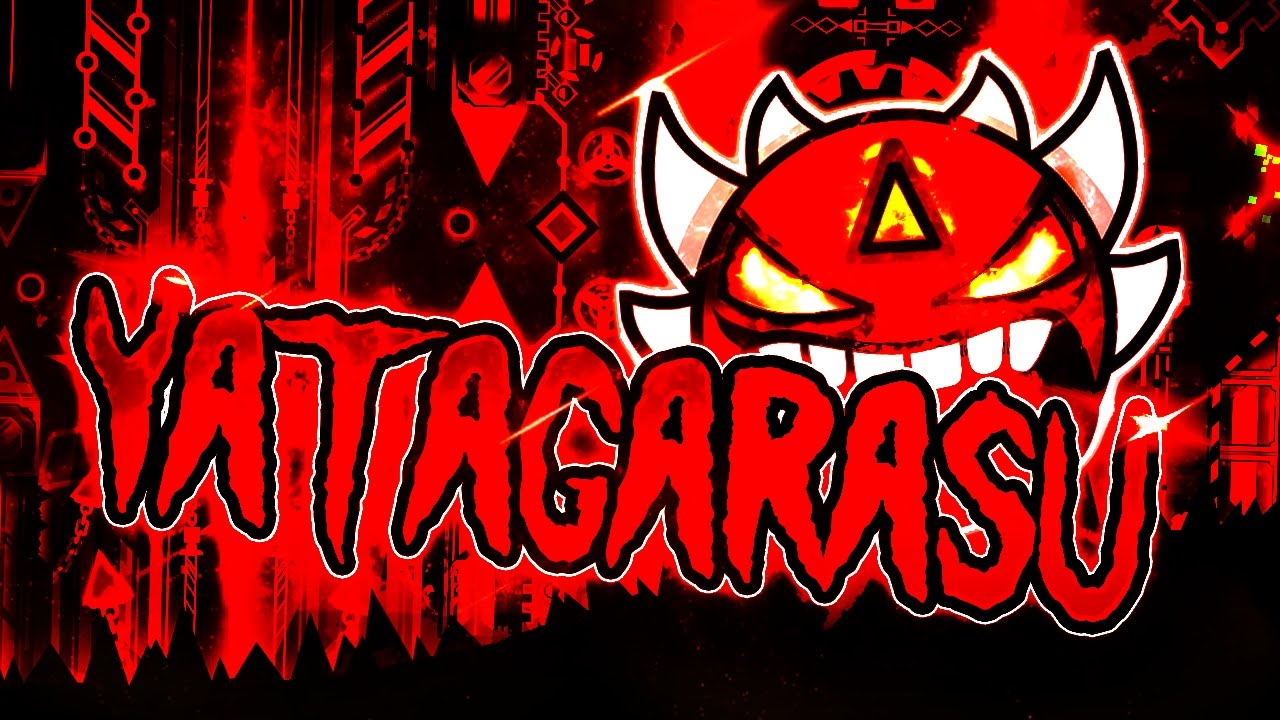 Geometry Dash Yatagarasu (abbreviated Yata) hosted by Viprin and Riot and validated and published by TrusTa is an Extreme Demon mega-collaboration level rated 10 stars. This level, known as "the final Demon of 2.0," celebrates The Yatagarasu, a three-legged crow from Japanese folklore.

Yatagarasu was supposed to be a new Bloodbath and was inspired by The Hell Factory's song as well as the presence of three coins at the conclusion as a completion bonus. GeoStorm members felt that Yatagarasu would be a worthy mega-collaboration sequel to The Hell Factory, which in turn was an intended sequel to Cataclysm by Ggb0y.

The level begins with a ship sequence. This part is fairly dark, making it difficult to observe the layout. The Yatagarasu makes its initial appearance in front of the player. This section contains a Low Detail Mode button. Following that comes a cube series with unseen obstacles, with the sole indications of their presence appearing as mirror images on the floor and ceiling. Finally, there is a teleportation gateway connecting to Anubis's portion.

The finish of the challenging cube sequence is followed by a short UFO with multiple gravity fluctuations. The next cube is a short one with a triple spike jump. Following that is a brief straight fly sequence that passes by a skull, followed by a short mini-ball part with precise timing.

This is an extremely long and tough wave portion with a flashing background and very tight openings. The tiny spaces necessitate perfect timing, and there are many speed portals to confuse the player. The name "Jeyzor" flashes by fast along the ground.

This segment begins with a UFO sequence and progresses to a somewhat tight ship sequence. Following that is a tight wave segment with a few undetectable gravity portals and speed portals to confuse the player.

This section begins with a simple gravity ball segment. Following that comes a ship with varying sizes and gravity adjustments. A slightly more difficult gravity ball sequence follows. This section features numerous objects having a white pulse effect. Furthermore, this portion, along with Rek3dge's and Xcy-7's, is arguably one of the simplest parts of the level.

This section concludes Findexi's ball segment before going to a brief ship sequence. A short cube pattern with multiple jump orbs follows. Following it is a brief auto segment that reveals the level's name, along with its logo, the Yatagarasu itself, with the level's name in capital letters, "YATAGARASU" in the "Oxygene 1" font. The level then sends the player to Weoweoteo's portion. The music slows down.

The song then dips and starts up a new, faster tempo. It begins with a triple-speed straight fly ship segment before transitioning into a tough wave section. If the player completes this, it will transform into a mini-ball part with incredibly tough timings.

This segment consists of a double-speed wave section that needs good timing and spam abilities, followed by an easier mini-ship straight fly section.

This section begins with a perplexing cube segment with tricky timing and teleportation gateways. It then goes to half speed, with some challenging timings of a UFO and robot section.

This section begins with a challenging mini-flying portion, followed by a few size and gravity changes to throw the player off. It is followed by an exceedingly tough ball requiring excellent timing.

This is regarded as one of the easiest parts of the level. This segment is a simple hard cube with some tight and critical timing.

This section begins with a double-speed ship segment with straight flying and challenging timing with effects to create a "cave" effect where the player has limited vision of the obstacles in front of them. It is followed by a difficult ball with challenging timing, similar to COSINE's section. Rustam also produced a skull art piece at the ball section.

This portion begins with a brief half-speed robot sequence with challenging timing, followed by a wave segment that is primarily an enduring wave "spam" phase, which shifts to single-speed as it transitions into Michigun's part.

One of the most difficult and aggravating parts of the level, this begins with a double-speed robot with tough timing, followed by a cube with equally challenging timing. It then transitions into a triple-speed wave with extremely difficult timing, followed by a brief but difficult straight fly portion with a difficult triple spike at the finish. The player must jump soon after the triple spike, or else they will crash owing to a move trigger that will cause the Yatagarasu to collapse and kill the player, timed with the "caw" in the music. There is also a trigger under one area of the wave that turns the RobTop remark at the end to a picture of an Easter egg. "Viprin" and "Michigun" are written next to the egg.

This section begins with a half-speed UFO sequence with very tough timing, followed by a ball portion with equally difficult timing. The music slows down here.

Hinds' segment is another another difficult and irritating part. It begins with a swing-copter with exceedingly difficult timing, then shifts to an upside-down mini-ship with a tunnel-like straight fly that appears in a couple Hinds' stages. It is followed by another highly tough swing-copter mode, a challenging mini-ball and mini-UFO with tricky timing, and a last mini-cube segment.

The hitboxes of the obstacles in this section are incredibly difficult and annoying to locate, and the entire section is at half speed and decorated in very dark colors. The first half's ship-gameplay is identical to Viprin's. It is followed by a UFO with tricky timing and gravity gates.

This is another difficult and aggravating portion. It starts as a mini-ship, then transforms into a dual, then returns to a non-dual to confuse the player and is fully straight flying. It is followed by a half-speed wave with exceedingly difficult timing and a mini-ball portion with equally tough timing. The ball transforms into a normal-sized ship with shifting speeds, signaling the start of CSX42's segment.

This is possibly the most difficult part of the level and was originally near impossible. The section begins with a half-speed mini-ship sequence with tough straight flying, followed by a wave with exceedingly difficult timings. It is followed by a ball with perplexing and challenging timing. Then it transforms to mini before switching to a mini-ship with a short challenging straight flying.

This entire section is at tiny size. It begins with a triple-speed mini-ship segment with hard and difficult moves due to shifting objects and trick leap orbs. It is followed by a ball portion with a mechanic similar to one of FunnyGame's levels, Lonely Travel, albeit considerably more difficult and perplexing. It is followed by a UFO portion with hard timing and more moving things. The name "FunnyGame" is displayed in the backdrop throughout this segment.

Decorated by Viprin, this segment is largely just a cube section, although this entire cube section is filled with challenging and difficult timings. Words beginning with "D" (excluding TrusTa) flash by in the foreground, including "death," "decay," and "TrusTa," the verifier of this level. It then closes with an auto-ship being "borne" by the Yatagarasu and RobTop's closing comment, "It is not enough for me to succeed; others must fail." Following that, there is a heart in between the level's final two spikes. Finally, the level concludes with the Yatagarasu and the text "The End." The final screen features an elaborate art piece of the Yatagarasu. The RobTop ending comment can be substituted by an Easter egg found in Michigun's portion.

"There is an old legend which tells about a three-legged crow with godlike powers. It is called the Yatagarasu." - TrusTa