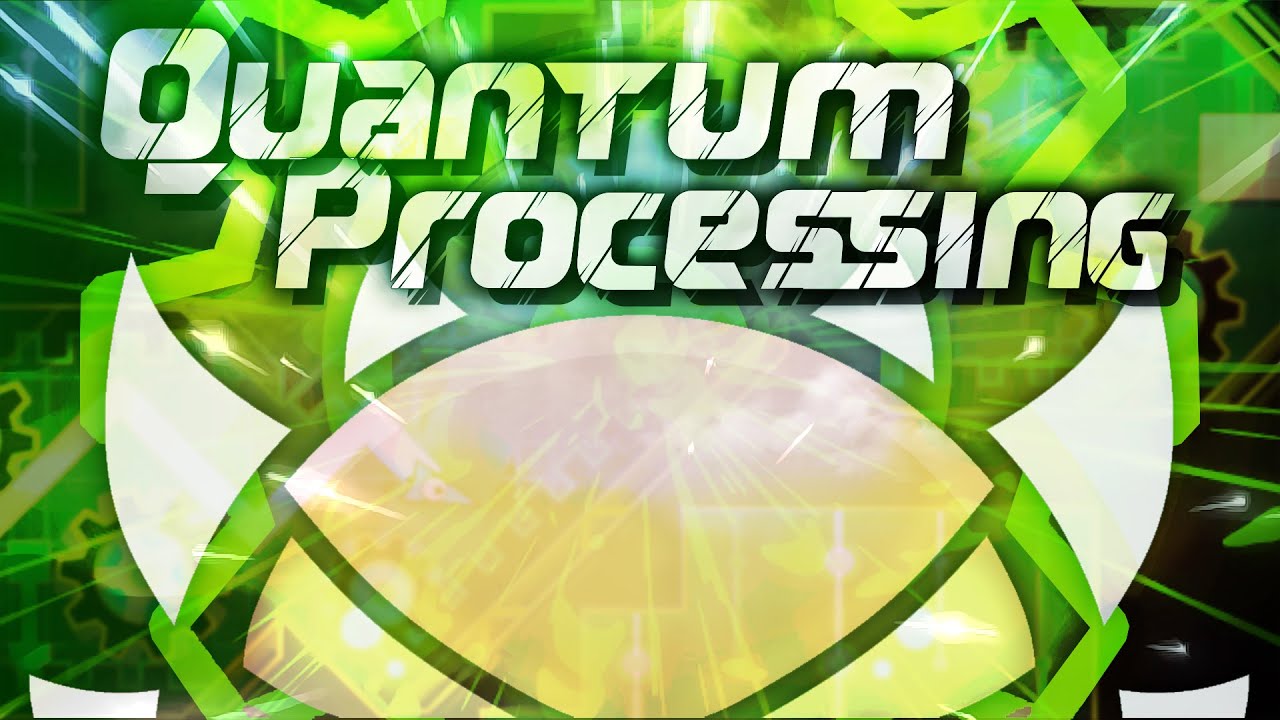 Geometry Dash Quantum Processing is an Extreme Demon level rated 10 stars, collaboration produced by Riot, Hinds, and Sil3nce, uploaded by Riot, and certified by Rampage. It is, as the name implies, a vastly enhanced replica of Blast Processing. It is tough owing to the very small areas throughout the wave parts and the powerful straight flying.

It should be noted that since this is a recreation of Blast Processing, the parts will be greatly influenced by those found in that level.

The level begins with a cube part that is followed by three challenging leaps over cogwheels and a yellow pad. Two more orbs appear, and a gravity vortex transports the player to another set of blue orbs, this time with green orbs as traps to avoid. A leap and a blue orb time send the player to another set of cogwheel hops and a blue orb, which leads into a mini-portal that rapidly returns to normal after a blue orb. A pink orb and a triple spike leap follow, followed by an orb labyrinth in which you must learn which orbs to strike in order to reach the following wave section.

This next wave part is quite narrow and will take complete attention to pass. Before becoming dual, the risks were largely made up of cogwheels and spans. This dual is equally as difficult as the standard, but it now has some false lines for the player to learn. It returns to normal at the conclusion of this wave for the last spam before the following part. The player must fly through four pillars to reach a timing ball section with several challenging yet similar timings and a type of corridor. Following this comes a tiny ship segment in which the player must fly through four more pillars before another ball with a lot of phony pads and orbs to avoid but also a lot to strike. The ball finishes with some timing, and a text that says "GO!" appears.

Another wave section emerges here, quite similar to the first, albeit the cogwheels aren't as scary as they were in the prior wave segment. Instead, the most difficult impediments are smaller ones. Similar to the previous wave, it goes dual for a short time before returning to normal, with a minimal difference in gameplay style. Another dual shift follows, this time lasting a little longer than previously. The last minutes of the wave return it to normal before proceeding to the next portion of the level. It's a cube with several timed jumps made of cogwheels, spikes, and orbs. Following that comes a ball portion with some tricky timing and orbs thrown in for good measure. A UFO appears for the first time, with some unusual timing between symbols and spikes everywhere. Gravity portals exist as well, as does a mini-portal at the end. After that, there's a cube section with fake spikes and a lot of orb timings to learn.

Coming up is a very small ship section with many gravity portals to adjust to, followed by a ball segment with numerous orbs and slopes to go off of, some of which are bogus and must be avoided in order to pass through. Following that is a UFO with several gravity portals and a couple of tight spots spread throughout, followed by a tight ship segment featuring a mix of maneuvers and straight-flying action. The level concludes with a cube area with numerous hard leaps, around three to five spikes wide, and blue orbs to time correctly. Following the first half of the cube's pretty normal gameplay, a little labyrinth of blocks and orbs arises as a last challenge to the player, who must remember which blocks to leap from and which orbs to strike in order to avoid failure. Two leaps, one of which is a triple spike, will act as the level's last jumps as "YOU WIN" can be seen in the backdrop and the level concludes with a yellow pad.